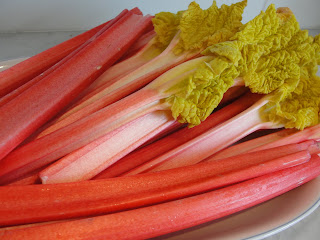 There are a few things that I look forward to in the spring. Green grass, rainy days (not as many as we have had), buds on the trees, asparagus and rhubarb! Not only are rhubarb’s ruby red stalks beautiful, it really is a delicious treat. I think of rhubarb as a classic Canadian food. Much like fiddleheads (which you can read all about over at Active Kids Club), rhubarb has a short and sweet season. Once the season is gone…so is the rhubarb. I think this is what makes it so special. Unlike apples, pears, and other “all season” fruit, rhubarb can only be found in the grocery store in the spring. This year I have already enjoyed making a rhubarb chutney, which I may have to make again, and preserve for future use. The other recipe my family always loves is a crisp…who doesn’t love a crisp?? Here’s what we did.
Rhubarb and Raspberry Crisp
(adapted from Martha Stewart) 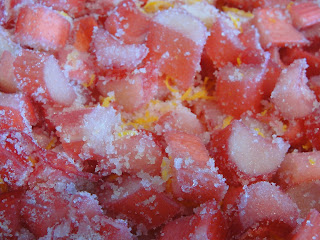 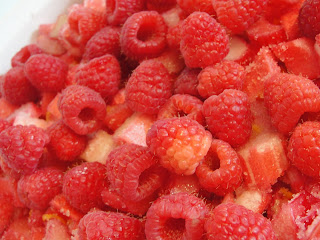 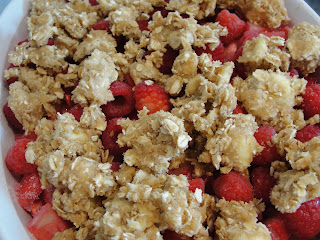 6. cover rhubarb & raspberry mixture with crumb topping
7. bake until topping is golden and filling is bubbling 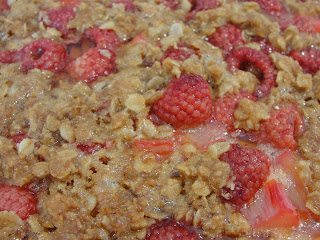 8. turn oven’s broiler on and finish browning topping, until it reaches the desired colour
9. let crisp sit and cool before serving
If you like, you can add nuts to the crisp topping…1/2 cup slivered almonds. Serve the crisp with ice cream. I made this crisp for Easter dinner to celebrate spring! How do you use rhubarb?
Hot Tip: To extend the rhubarb season you can freeze rhubarb. Cut rhubarb into 1″ pieces and spread evenly on a baking sheet. Place the baking sheet in the freezer, leave in the freezer until rhubarb is frozen. Transfer frozen rhubarb to a freezer bag.
Previous Post: « How to Make Beautiful Egg Carton Flowers with Kids
Next Post: uKloo »