Load? Effort? Fulcrum? Pulley? Do these words sound familiar? If your child is learning about simple machines then you have undoubtedly heard these words. What exactly do they all mean? What is a simple machine? Sometimes the best way to learn is with a fun STEM activity for kids.

Before we can start working on our challenge we need a good book to teach us about simple machines. The book How Do You Lift a Lion? by Richard E. Wells introduces kids to simple machines. The kids in the book lift a lion using a lever, they move a panda using a cart with wheels and they transport a basket of bananas to a tree full of hungry monkeys using a pulley. So, I put this simple machines challenge to my daughter – find 3 ways to move a lion.

Now we don’t have a lion laying about our house, so our lion of choice was a toy. This lion comes from my husband’s Fisher-Price circus train set…from the 70’s. He is a pretty cool lion. How did we go about making him move?

Simple Machines Activities for Kids
3 Ways to Move a Lion

How to Make a Pulley

Okay, first you are going to need a lion to move. Our lion is actually about 40 years old. He is from my husband’s Fisher-Price circus set – from when he was a baby! Crazy that my mother in law kept it all of these years. Anyhow, you can find lions as part of toy safari kits. Wherever you get your lion, I’m sure it will be perfect for this STEM challenge.

After brainstorming some ideas, my daughter decided to the first option was to build a pulley from popsicle sticks. A pulley is a simple machine that allows you to lift an item high. She went to work building a platform using popsicle sticks and tape. The platform was built large enough and sturdy enough to hold our lion. The lion is the load that we have to try and lift.

Next, she looped the string over the tree branch. My daughter kept the string attached to the spool and used the weight of the spool of string to work as an anchor. The string was secured around the platform and then up and over the “y” in the branch…thus creating a rudimentary simple machine, a pulley.

In order to move the lion, effort needs to be used. With a pull on the string (effort), the lion was lifted off the ground. We discovered the lion was a little front heavy. So, we decided it was okay to use a loop of tape under his belly to keep him in place on the platform…that lion was slipping all over the place and he needed a seatbelt.

Our pulley worked. We were able to lift the lion up in the air. Now we wanted to move the lion along a path…we would need another simple machine.

How to Make a Wheel and Axle Simple Machine for Kids

The next mission was to move the lion from one side of the table to the other. This task followed perfectly after the first one, as we were able to use the same platform as the base for the cart that would hold our lion – the load.

The most challenging part about making a cart with wheels was figuring out how to make wheels that would spin…thus we needed to make an axle.

My daughter searched through her Mecanno kit and found 4 wheels…you could also use LEGO wheels. She was able to make an axle by cutting the plastic coffee stir sticks in half (lengthwise). Depending on the size of the hole in your wheel and the stick you are using, you will have to make certain adjustments.

By cutting them she was able to feed them into the hole in the wheel one at a time.

After taping the wheel and axles to the underside of the cart the lion was able to be pulled across the table, with the wheels spinning.

Our wheel and axle simple machine worked! We have lifted the lion straight into the air, we have moved the lion along a path and now we wanted to figure out how to toss our lion into the air. We need to make a lever.

How to Make a Lever with Popsicle Sticks

The final attempt at moving our lion was to use a lever. My daughter started this one by making a board, the lever, that the lion, the load, could stand on. The board was 3 popsicle sticks long and 3 popsicle sticks wide.

She then stacked and taped together a pile of popsicle sticks. Two piles, actually. The piled sticks became the fulcrum…the point that our lever sits on and pivots on.

With the fulcrum in place and the lever on top with the lion, she was then able to activate the lever by pressing down, effort on the side of the platform the lion was not standing on.

She discovered that the further the lion or the load, was from the fulcrum the higher the lion went.

She was even able to shoot the lion off with a catapult action! I think this was her favourite step in the entire process. We were successful. We were able to move our lion with the use of 3 simple machines. It is always fun experimenting with simple machines. In the future we might try adding more weight to the lion…maybe more animals can be lifted at once. How would you move an elephant!? Trial and error with hands-on activities are a fun and memorable way to learn. 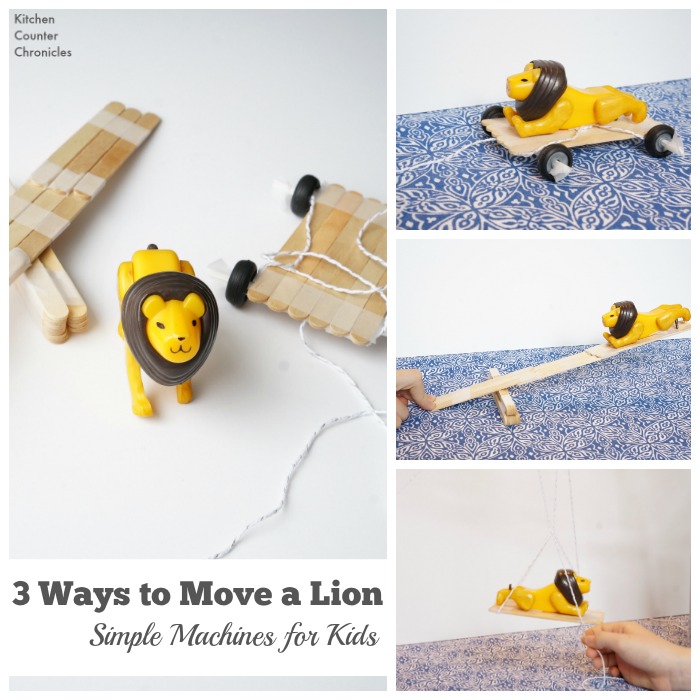 A few of our other favourite STEM activities for kids

Can you build a raft from corks?

Today’s post is part of the Storybook Science series taking place on Inspiration Laboratories. Be sure to head over and check out all the cool books and science activities that are being shared. So many great ideas to inspire your kid’s mind.

Previous Post: « How to Make an Easy Bee Bath with Marbles
Next Post: A Cool Father’s Day Craft for Tweens to Make – A Keychain for Dad »