You are here: Home / holiday / Respect the record store 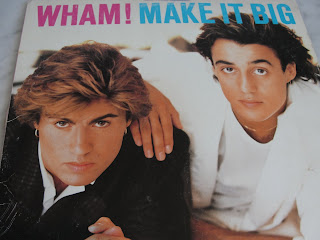 Try and imagine downtown Toronto, 20 years ago. Now picture it bright and early on a Boxing Day morning. The corner of Yonge and Edward St. You might think that the street would be quiet…but clearly you weren’t a teenager. Boxing Day was the day of the monster sale at HMV – 4 CD’s for the price of 3! Crazy!?! This was the annual pilgrimage that my husband, then boyfriend, his brother and I would make. I clearly remember the line stretching up Yonge Street for at least a block. It was early, it was cold, it was worth it.
My how times have changed. I heard a report last week that HMV is going to be selling off it’s international stores. They are doing a major re-branding in hopes of getting more cash for the stores. HMV – going under?
April 16th is Record Store Day. A day to celebrate the glory of the independent record store. While HMV is not an independent…its demise is a true reflection of how different the music industry is these days. I have spent many, many hours inside record stores – Penguin Music, Rotate This, Sam’s, A&A’s and shops I don’t even know the names of. There is something wonderful about flipping your way through the album covers. My husband is the true audiophile…I was just a groupie. And while at times, I will admit, I was bored after the first half hour…I miss those days of aimlessly perusing the albums looking for some hidden treasure. Laughing at the artwork or discovering a musical diamond in the rough. 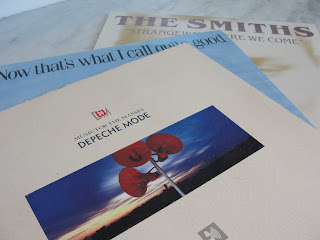 I took a poll of my friends on Facebook to see if people could remember their first record. Most people could. I think my earliest was Sesame Street Fever (Grover in John Travolta’s white pantsuit)…and I loved those Chipmunks. The first albums I purchased with my own money definitely included WHAM! My survey also included some incredible first albums…John Coltrane, Buddy Holly & the Crickets and the Stones. I also remember shopping in preparation for high school and purchasing 3 stellar albums; the Smiths “Strangeways Here We Come”, The Housemartins “Now That’s What I Call Quite Good” and Depeche Mode’s “Music for the Masses”. Good choices…still have them!
The fact that most people could not only remember, but laughed and shared memories about their first albums reveals a lot. It shows us that music plays an important role in our lives in our history. Funnily enough many people shared the same “first” album experiences. Living in different parts of the country many of us were listening to the Minipops and Sesame Street! We were spending our saved up birthday money on Ah-Ha, Flashdance and Michael Jackson! Awesome.
So, what about those old records. We still lug ours around wherever we live. My bro-in-law bought us a record player a few years ago and every now and again we dust it off and spin some vinyl. There really is nothing like album art, liner notes and the smell of an old album…a little musty. In fact we have a few Beatles albums hanging on our living room wall.
Has respect for the record store been lost? Maybe. Obviously, the world of music has changed. There are way more genre options available today. The convenience of iTunes has led to people shopping online and at home for music. How easy is it to simply plug in a band name, push a button and ta-da a few minutes later the music is streaming through your speakers. No need to find a place to store the physical album or CD…just add the file to your external hard drive.
Are we missing out on something by experiencing music in this way? Perhaps. If I asked when the last time you went into a record store was…I bet it would be a long time ago. We took our daughters to our old hang out, the downtown HMV. They were amazed. I took them from the very top, to the very bottom. They couldn’t believe the differences in music playing on each floor…and the enormous number of CDs! I think maybe we are missing something by not visiting our record stores more often. If you set aside for a moment that these stores employ incredibly passionate people…they house our history and our future.
I seriously could go on and on about my love of all things music. But for today, let me suggest that, on April 16th why not take some time to walk into your local record store. Give yourself an hour…feed the kids ahead of time. Give yourself a $20 budget. See what you can find. Don’t be afraid to let the kids touch things…those CD’s and albums have been touched by many hands…that’s part of their charm. Make some new memories.
Hot Tip: Check out the Record Store Day official site for info on special deals, special releases and special events going on at record stores near you.
Previous Post: « Green Life – smile!
Next Post: Kitchen counter confidential – breast friends »