So, yesterday’s post was all about getting yourself out “there” and taking a chance on doing something new. Could you imagine anything more out “there” then standing on a stage and trying to make people laugh? What about interviewing legendary people (Don Cherry, Steven & Chris, The Kids in the Hall, etc)…and having to be funny? 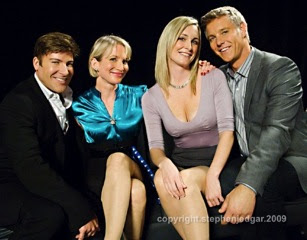 Sounds terrifying to me (as I sit typing into my computer from the comfort of my livingroom). My friend, and mom of two lovely girls, Robyn is doing just that. She’s an actress, writer and producer…triple threat. Robyn has teamed up with Jude Klassen on a number of productions, including their highly successful Judecast Live. How does this mom pursue her dreams? Let’s take a look inside Robyn’s kitchen and find out how she gets things done.
Tell me 3 things about yourself
My dad thinks that I would make a killing selling mattresses…his faith in my comedy/TV writing career is staggering…
In an interview with Peter Mansbridge, after being warned by his publicist that he is a very serious man, I suggested he try to get more of his guests to cry – like Barbara Walters. Peter laughed, but his publicist did not. 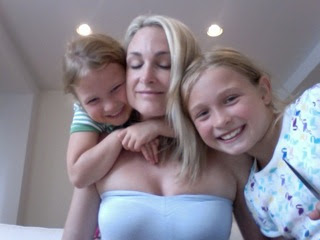 I am grateful to have the world’s best husband and kids…and to be from Halifax (everyone likes a Maritimer and people give you beer).
Are you for, or against small appliances on the counter?
Small appliances are ok. Small rodents, not ok…actually, I say small appliances are ok, but when I’m having a dinner party, I hide them in the cupboards – even the toaster.
Name 5 things that are on your counter right now 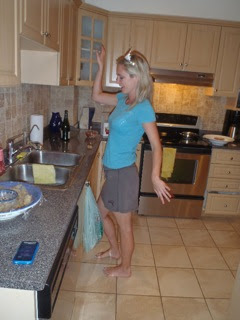 A bottle of Bombay Saphire Gin (for medicinal purposes). A vase that is made up of two smaller vases. Half a headless naked man and half a headless naked woman, because nothing says art like a naked torso. Baby powder…Deb Robinson from The Boom Comedy Troupe was over last night writing sketches with me, for my stint as guest host on their June 23rd show (The Boom Show, 9pm at Supermarket in Kensington Market – guest hosts last month were Colin Mochrie and Scott Thompson)…she had an unfortunate chafing situation going on and a good hostess rolls with anything, right?
What if anything would you change about your kitchen counter?
I’d love a granite counter! (Although I’m positive this would result in me breaking more glasses.)
What is your favourite thing to do on your kitchen counter?
Well, other than re-enact that famous scene from The Postman Always Rings Twice, I’d have to say that I love a good old fashioned Maritime kitchen party! Friends and family gathered around, laughing and cooking together…oh, and the look of joy mixed with pride on my little girls’ faces, when they’re baking with me. 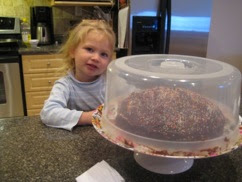 I always love a well prepared hostess…gin and baby powder…ready for anything! Thanks for this peak into your kitchen. If you are looking for a hilarious night out…check out Robyn hosting The Boom Show on June 23rd at Supermarket in Kensington Market (tickets $10 at the door).
Have a great weekend everyone! Thanks for a great week!
Previous Post: « Bloggers give back – clean up
Next Post: Father’s Day – BBQ Sauce »