I’m always amazed by the women I introduce you to every Friday, and this week is no exception. When presented with the opportunity to work for a year in a foreign country, at a major medical centre – this family took the chance. Travelling from Scotland to Toronto, with 2 young boys, leaving her career and family behind, Lesley and her family jumped in with both feet. About a year later, they have now returned to Scotland…are readying their house for sale…and wondering if they will be back in Toronto soon. Let’s take a look into Lesley’s kitchen in Scotland…let’s see the the place they are calling home today.

Tell us 3 things about yourself 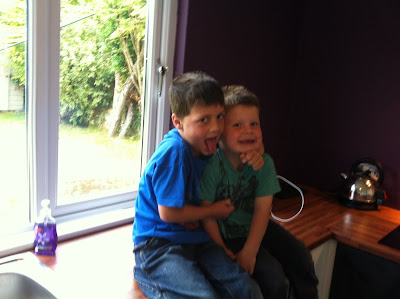 I am a mom of two beautiful, energetic boys, Sam 5 and Tom 3, a wife to Sean who is a cardiologist and I work part time as a senior staff nurse in an acute coronary care unit in a hospital in Glasgow. As you can see, the welfare of hearts feature highly in our home!!
Are you for, or against, small appliances on the kitchen counter?
Previous Post: « Clothes peg alphabet
Next Post: 8 years old! »