You are here: Home / book / Science for Kids: The Smiley and Melty Snowman
304 shares

*warning: this post reveals some information about Santa that might not be good for little eyes to read*
There really has not been a lot of snow in our city this winter. It is kind of sad actually. Today it poured rain all day long…it should have been a blizzard! This strange weather has not stopped us from dreaming of snow and reading about snow. On our last run to the local library we picked up an assortment of wintery books. The one book that really caught my daughters’ eyes was The Smiley Snowman by M. Christina Butler. This is the story of a group of woodland animals who build a snowman, with a big smiley face. However, when they leave him overnight his smile turns to a frown. The animals think he just needs to be warmed up…so they pile on a scarf, a hat and a blanket. This makes the snowman all melty. After they build him up again they realize that all the snowman really wanted was a hug. Sweet. When we were all done reading this book we had a question. Would a snowman really melt quickly if he had clothing on? Would he melt faster without the clothing on? Time for some science for kids. 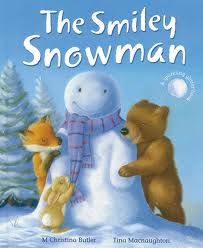 Hooray, an experiment! Now, since we don’t have any snow we couldn’t do this experiment with real snowmen. The next best thing are our ice cube people. What makes this experiment super awesome is the fact that we used time lapse photography to document the progress of our ice people melting. Last fall I won a Hue Animation Studios – Stop Motion Animation kit on Red Ted Art. I was so excited to win this! And, Santa was very excited to give the kit to the girls for Christmas. I plan on doing an entire post devoted to the Hue Animation kit next week. But suffice it to say, when I realized that I could do time laspe photography with this camera I did a little jump for joy! And this experiment was a perfect time to use it! Here is what we did…
Stacked our ice cubes and placed them in two identical bowls. 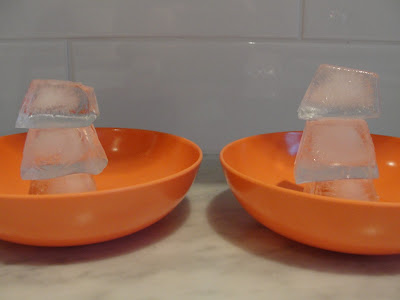 We placed a small piece of flannelette over the one ice cube snow person, to simulate the smiley snowman’s hat, scarf and blanket. 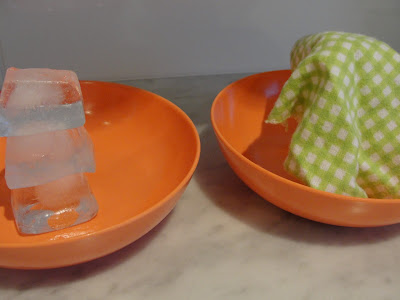 Placed them on the kitchen counter and set up the camera to take a photo every 5 minutes for 4 hours. I had no idea how long it would take to melt. It turned out we only needed 2 hours of filming.

Pretty cool, right? We discovered that the ice man with the blanket actually melted slower than the one who was exposed. The blanket actually worked to insulate the ice, keeping the covered ice cubes frozen longer. This opened up a discussion about the insulating properties of various materials like snow, wool and wood. The funny thing is that yesterday, my friend over at Mom to 2 Posh Lil’ Divas actually posted about creating ice/snowmen and experimenting with melting them in the Florida sunshine. If you want to see how her experiment turned out take a look here. 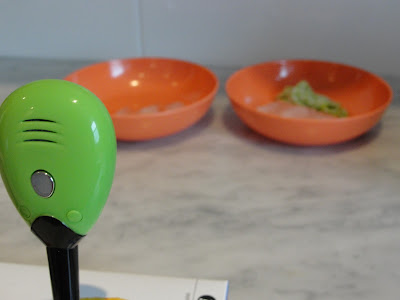 That green thing is our Hue Animation Stop Motion Camera

Not only did this spark some science talk, but the use of time lapse photography has intrigued the girls and we have plans to use it in a variety of different ways. One idea is to aim the camera out our kitchen window (which faces west) and capture the view over the course of an entire 24 hour period. I have a feeling it would look pretty amazing. Just another way that books can turn on a child’s imagination and expand their learning experiences.