You are here: Home / birthday / Cupcake Birthday Party for Kids 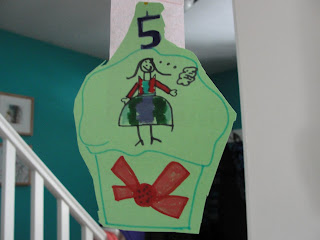 The title for my daughter’s 5th birthday party was “Cupcake-Fest”. Yes, a party devoted to the mini-cake! My daughter has always had great ideas for party themes. Her 3rd birthday was a pasta party…which involved making pasta from scratch and making crafts with coloured pasta…it was awesome. This year, we landed on cupcakes.

Start with the invitation – cupcake shaped. 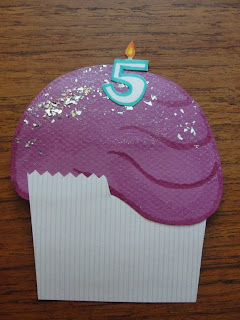 Loot Bags:
Then there are the loot bags. Last year, at my daughter’s 4th birthday party, I started the trend of making the loot bags myself. I know that when my girls bring home a loot bag…the bag is the first thing to be tossed aside in favour of the loot! That made me think about making the bag itself part of the loot! I found a fun cupcake fabric at the store and sewed it into simple loot bags. I filled the bags with cupcake stickers, a little cupcake cookie cutter and other cupcake themed treats. 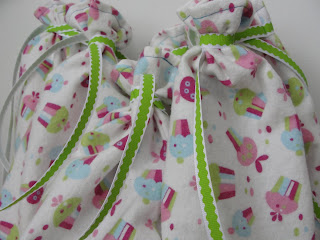 Decorations:
I find this is always best to occupy the kids with crafting during the hours before the birthday party begins. For cupcake-fest I simply drew a cupcake on coloured construction paper and had the girls colour them as they wished. They looked spectacular hung from ribbons and streamers around the room.
Activities:
What to do at cupcake-fest…make cupcakes! Kids love baking…and the potential to get messy. We gathered the kids around the dining room table, where I had the ingredients out and ready to go. 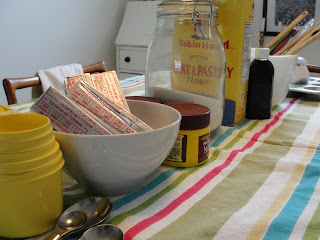 Hot tip: print the recipe…I did not…and had to keep the laptop a little too close to the messy bakers. The older kids read the recipe and helped with the more difficult ingredients. The younger kids get into the measuring and stirring. 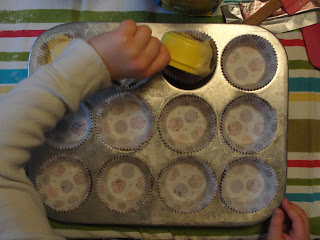 Yes, these cupcakes will not be winning any awards, but they were made with love. After the baking was done…next step was the decorating. Pick up as many sprinkles, sugars, chocolates you can, at the local bulk store, to top these little masterpieces. A couple of decorator bags filled with buttercream icing act as the glue for the toppings. Let the madness begin!
While the cupcakes are baking the kids were occupied painting cupcake shaped fridge magnets from the craft store. You can’t have a party without a game of pinning something on something? 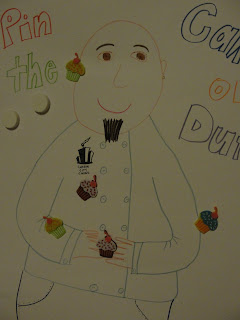 Pin the cupcake on Duff was our game of choice. If you aren’t familiar with Duff Goldman…he’s the chef behind Ace of Cakes. My girls LOVE Duff. This game was a huge success!
Cake:
Of course, you can eat the cupcakes…fresh out of the oven. Pack up a few for each child to take home. Bring out the ice cream and enjoy the fruits of your labour.
Happy Birthday!
Previous Post: « Happy St.Valentine’s Day
Next Post: Green Life = Easy 2 »