You are here: Home / dog / True Confession of a New Puppy Owner 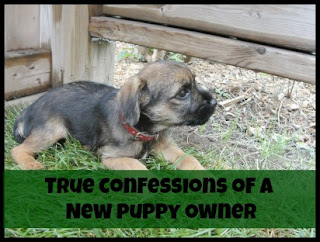 How excited were we when our little border terrier puppy, Arthur, joined our family? Super excited. He was a real sweetie. He seemed a little shy – but we thought that just made him cuter. Today, I’m going to open up with the truth about what has been happening ever since Arthur arrived. I have always tried to be open and honest on this blog, so this is why I feel that I need to share where we are at today. The truth is that Arthur has taken a little vacation, back at the breeders. Why, you ask. Well, he needs a little help, and so do we.
As I said Arthur has always been a little shy. Our first trip to the vet had Arthur scrambling off the table, trying to get as far away from the vet as possible. This seemed to make sense to us – you know, based on the stereotypes about vets and dogs. What we discovered as the days went on was that Arthur was afraid of most things.
It wasn’t really obvious at first. His biggest issue was his biting. I know puppies nip and play, but Arthur was full of jumping, biting, growling and barking. Every walk had moments where Arthur was aggressively jumping and biting us…all of us…even the girls. Not cool.
We contacted the breeder and they offered great advice. We tried our best to implement their advice. The crazy thing was that even as he was going through all this crazy biting, he was taking to our training so well. He crate trained immediately. He was house trained in a few days. He knew his name. He understood “no”. He was proving to be a very smart little puppy. But, the biting continued.
We socialized, we walked, we exposed him to everything…he still bit.
So, finally came our first night of puppy pre-school. This would be our chance to see how other puppies behaved. This would be our chance to see Arthur perform. We were a little nervous, but to be honest, I sort of assumed that all puppies were probably jumpy and anxious. I was WRONG.
It was almost immediately apparent that Arthur was afraid. He cowered. He ran to the end of his leash to get as far away from everyone as possible. He tucked down low. And when he could tell that he wasn’t getting away, that was when he lashed out with barking and biting. Poor Arthur.
After the class was over, and we peeled Arthur out from where he was hiding, under the chairs. We had a chat with the instructor. Clearly Arthur, the border terrier, was not behaving like a border terrier puppy. This was going to take some serious work.
So, again we contacted the breeder. We explained how Arthur had been behaving. How our kids were afraid he was going to bite them. How he was biting them, and us. How he had behaved at the preschool class.
The breeder made a number of suggestions. We opted to take Arthur to them. He will spend a couple of weeks at their home. They will, and they already have, socialize him and correct his inappropriate behaviours. They have reported that he is doing well. They’re impressed with the training we’ve done with him. They are hoping that they can stop his biting.
That’s where we are at. The girls are handling this really well. They are emotional at times, wishing their puppy was home. Heck, my husband and I are emotional at times. We’ve explained that we hope he’ll return to our family. However, the reality is that if the biting cannot be stopped we may have to return our little guy. That’s a thought for another day.
For today, we are happy that he is getting the help that he needs. We are thankful that we have such a thoughtful and helpful breeder. We are hoping that he is having fun running around with all the other border terriers they own. We await their updates. We await the day when we can go by and pick up Arthur.
The truth is that all the planning in no way prepared us for this situation. We read all the books, watched all the DVD’s, we talked to everyone we knew, we were ready. Just not quite ready for this.
Have you had issues with a puppy in the past? How did things work out for your family?