You are here: Home / Uncategorized / Our morning at the marathon 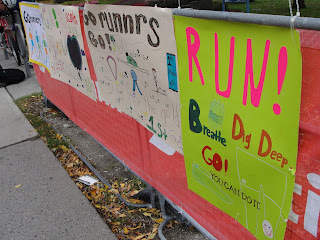 The Toronto Waterfront Marathon was held this past Sunday all across Toronto. You may have seen our pictures at Bunchfamily.ca on Tuesday, for their “Postcards from Bunchland” feature. Let me start by saying I was exhausted when I woke up on Sunday morning. You know from my previous posts that I was at Blissdom last Thursday, Friday and Saturday…exhausted. But, when I saw that the marathoners would be running along our stretch of Queen Street between 10:15 and 1:30 pm, I knew we had to go. True, we would be rushing home to get ready for an afternoon family b-day party for my nephew…but I knew we could not miss it. I am so glad that we didn’t.
Thanks to my husband, this year we watched a lot of the Tour de France. Through the miracle of modern television, we were able to fast forward through the more “boring” parts and commercials – and focus on the sections that took the riders through small towns and the mountains. The girls were fascinated by the throngs of people who cheered on at the side of the road. Often times the fans were dressed in ridiculous outfits and would even run along side the bikers! We saw the odd “full moon” even though it was daytime. Incredible passion.
Now, I wasn’t expecting our experience watching the Toronto Waterfront Marathon to be like watching the Tour…but I had a feeling it might be quite magical. I was right. 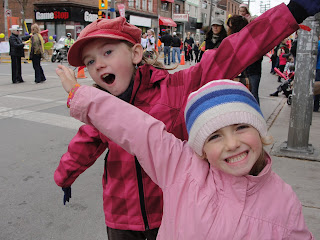 As we stood on the curbside awaiting the arrival of the first runners, the girls were giddy with excitement. It was cool and a looked like it might rain at any moment, but we were ready. When the leading police car drove by we knew we were moments away from the arrival of the marathoners. I must say, it was quite emotional seeing the first runner go by. My girls felt it too. Huge smiles on their faces. Cheers from their mouths. It was amazing. 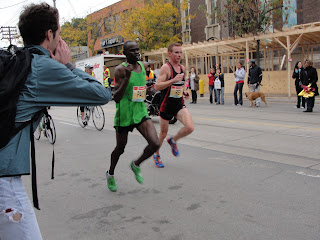 You can probably tell that I am the sort of person who gets a little teary eyed at these events. When the first woman came striding by my daughter said “I didn’t know women could run that fast?” Wow! That was exactly why we went. We can see women achieving on television and in books all day long, but only when my girls saw that first woman did they really understand…we can do anything. 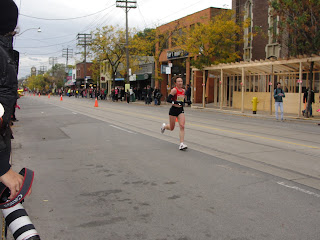 We stayed for about an hour…we even saw the Flash run by. By the time we were ready to go home the groups of runners were getting larger and larger. I didn’t know if we would be able to get across the street…and home. As we darted across the street we giggled about our outing. We made a promise to come down next year…to bring my husband…he was home getting ready for the party. It really was a fabulous way to spend a Sunday morning. We love living in this city. 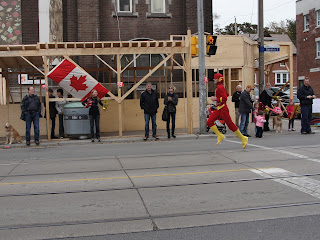